Astute Surveying were requisitioned to compose a procedure to position a 180 foot barge which employed 3 hoppers placing two layers of rock over two gas pipe lines approximately two kilometres in length. Specific design criteria needed to be adhered to and daily survey progress plans and reports had to be delivered within hours following survey.

Two smaller barges, working alternately, collected the rock and delivered the barge load to the hopper barge. They then placed the filter material into the three hoppers.
It was our task to position the hopper accurately over the pipelines and ensure that the material was placed evenly.
We resolved to use a 1m grid system where each grid had a value representing the volume placed inside, then knowing the excavator bucket volume the amount of buckets necessary to be placed at each 1m grid was calculated.
Once an area had been completed a sweep bar mounted on the stern of the barge would sweep the rock to a specific level.
The challenge was to position the barge and be able to lower the sweep bar to the correct design depth.
We designed a method using a combination of RTK GPS, DGPS heading sensors and cable counters. Using Hydrographic Surveying software we were able to measure the shape of the barge and locate the hoppers accurately with respect to the RTK GPS. This gave us the ability to position the hoppers over the 1m grid points. Using the RTK GPS provided an accurate tide value related to AHD, this coupled with the calibrated cable counters meant that we were able to position the bar at the correct depths in real time. This was necessary as the bar had to move to a gradient with the seabed and account for the tide in real-time.

The project was successful. The rock placement complied to the design specification, and as an added bonus the project was delivered ahead of schedule. 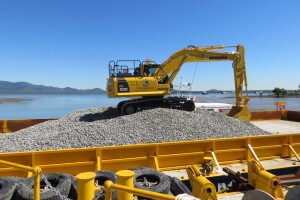 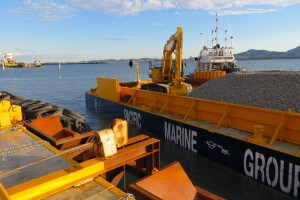